While reading Chapters 1 and 2 of our textbook (ICT4D by Tim Unwin), I was most interested in the role patents played in innovation.  I especially liked reading about the argument on the difference between ‘knowledge’ and ‘information’ in chapter 2.  I don’t know if I agree with the end argument Unwin comes to on page 23, “[We] need to lay to rest arguments that claim that knowledge is some kind of universal public good, and instead recognize that it is commoditised and serves particular interests”.  As a ‘knowledge user’ myself, and Unwin as an ‘information producer’, I can see his side, that in order to make money, he must sell his book, and that the knowledge contained is commoditised. It is hypocritical to his agenda, however, to take the commercial side.  He wants ICTs to be used to support poor and marginalized communities, yet claims that knowledge is not a universal public good.  Perhaps Unwin has aspirations for the ‘Enlightenment’ knowledge societies he writes about, but Unwin must live in the society of today.  It is hard to break the mold we are born into and are socialized into.  I often think about this in terms of everyday life, but in applying it to Information Communication Technology, I feel like some knowledge societies in the world today (mainly more developed countries) are making progress on this front.

Back to the creation of patents, I looked in the References of Chapter 2 and found a book called Patents, Citations, and Innovations: A Window on the Knowledge Economy by Jaffe & Trajtenberg.  Here is the google book preview.  I love the idea of the patent; that you will get a copyright on something you created and be known for it for a certain number of years before it becomes the public’s.  From what parts of the book was not copyrighted, my favorite quote is this: “Our conception of the role of patent citations is predicated on a cumulative view of the process of technological development, by which each inventor benefits from the work of those before, and in turn contributes to the base of knowledge upon which future inventors build”(Jaffe & Trajtenberg, 2002).  The authors go on to make the point that the relationship between technology and economics, the difference between the cost of producing an invention and the value it creates, is key.  In our capitalistic society, making money off innovations is how many make a living, but it goes against the vision of an enlightened society in the future.  Do we really want an enlightened society where all knowledge is free? It sounds like the dystopian futures I’ve read about in 1984, Brave New World, and it would probably morph into Fahrenheit 451.  What do you think?

The Links Between Agriculture, Advice, Radio, and SMS

An installment from the National Geographic series Digital Diversity that shows how “mobile phones are being used throughout the world to improve, enrich, and empower billions of lives” greatly coincides with the report by Farm Radio International, “The new age of radio: how ICTs are changing rural radio in Africa”. Both the report and the article state that radio is extremely important for agriculture and increases awareness  productivity  and knowledge. The article stated an interesting point that having other farmers speak on the radio creates a sense of community as well a larger impact. Rural farmers are more apt to take advice from people they can relate to and trust (like a fellow farmer) than a radio producer or radio host. The FRI report stated that there were some concerns about the availability of the shows since they are not always accesible, but the article states there is a higher chance of the farmers listening if they air them at night when they are relaxing in their homes. 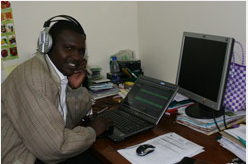 The “two way” versus “one way” communication was also mentioned in the FRI report, letters being the only option for farmers to contact the hosts or programs, though the article shows that many are utilizing their mobile phones and texting in questions and comments (around 20 texts a week per program). The FRI report states that there are more listeners when the program sends out text alerts around 30 minutes before hand. Both these usages of SMS are beneficial, quick, and painless. The benefits of radio are not only seen in agriculture, many could be seen seen in other sectors such as health. For instance, how farmers find out how to prevent or treat poultry disease can be transferred for human diseases and treatments. Overal the widespread penetration, accessibility, and affordability of radios’ make them great for less developed nations and should be utilized more often.

InfoDev Knowledge Maps for ICT Use in Education

The themes—impact, costs, current implementation of ICT in education, and planning—are a product of key findings identified before the compilation of the project. InfoDev attempts to narrow down the broad nature of ICT research by highlighting vital conclusions of the nature of ICT In education. Under each category, some key findings are as follows:

CURRENT ICT USE IN EDUCATION

Due to the nature of the inclusive report, which emphasizes the issues and priorities of developing countries and of stakeholders and policy makers, organizations and governments can begin to make changes that address these needs to make ICT implementation more effective and useful in the classroom.

For my generation, knowledge is at our fingertips. Literally. In the age of google, vast online databases, and the smartphone, tech-savvy individuals can find the answers to any question that flutters across their mind. What was the score of the last Saints game? What exactly is in a hand-grenade on Bourbon? What year did Katrina happen? While no question is a stupid question, does our reliance on these instant-knowledge technologies make us the stupid ones? Our ability to instantly pull up the internet to answer our questions eliminates the need to rack the inventory of our brains for the facts that we seek. Further, just as easily the information enters our mind, as soon as we put the iPhone away the knowledge parts too. Easy come, easy go.

In this video, comedian Pete Holmes critiques this same idea of “instant knowledge” and the implications it has on our generation’s actual intelligence. While our tools allow us to “know” so much, in reality, what do we actually come away “knowing?”